In her speech, Ursula Staudinger expressed her appreciation for the award. „I am delighted about the Braunschweig Research Prize. Especially because the interdisciplinary research on aging that I represent has now been acknowledged for its innovative power just as the technical and natural sciences of previous laureates.“ The prize money of 30,000 Euros will be used for further research work.

Ursula Staudinger also emphasized in her speech that demographic change is no failure. Rather, societies of longer lives are called to make better use of these gained years. “Aging as we know it from the past is not the aging of the future,” she said. 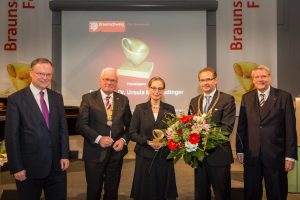 13 May
Spring Meeting, Board of Trustees, Federal Institute for Population Research